This is a snippet view only and any information relating to descendants of younger sons has been removed.

Walter Lindsay, 1st of Beaufort and Edzell, was a younger son of David Lindsay, 3rd Earl of Crawford, and acquired the lands of Beaufort and Arde, in the sheriffdom of Inverness, on 7 November 1458, which had been resigned to him by Margaret de Fenton of Baky.[1] He served as Tutor to his nephew David, Earl of Crawford during his minority and m. Isabel Livingstone, (she survived him and m. secondly, by 12 July 1480, to William, 1st Lord Ruthven, when they had a charter on his resignation, for the barony of Ruthven[2]). He d. in 1476 and was father of :

Sir David Lindsay, 2nd of Beaufort and Edzell, had succeeded his father by 13 March 1480 when he was witness to a charter by Thomas, Bishop of Dunkeld,[3] and had Sasine for the lands of Beaufort in 1494.[4] He m. firstly Catherine, daughter of Thomas Fotheringham of Powrie, and in relation to which his mother, Isobel Livingstone, spouse of William, Lord Ruthven, brought an action before the Lords Auditors on 27 June 1496, against Nicholas Fotheringham of Powrie, for the sum of 120 merks due by the marriage agreement and then outstanding.[5] He m. secondly, to Agnes Ogilvy, (she was widow of Alexander Straiton of Lauriston), and thirdly, to Elizabeth, daughter of John Spens of Wormiston, (she survived him and m. secondly, to John Anstruther of that Ilk). He d. in 1527 and was father of :

Walter Lindsay, younger of Edzell, was witness, with his father, to a charter by Andrew, Lord Gray, granting the lands of Woodtowns to John Wishart of Pittarow, and Janet Lindsay, his spouse, on 13 June 1507 and is then styled his eldest son and heir.[10] He was witness to a charter by John Erskine of Dun, granting the lands of Balgasky to George Stirling of Brekie and Margaret Dalgleish, his wife, on 23 April 1510,[11] and was k. during his father’s lifetime at the battle of Flodden on 9 September 1513. He was father of :

David Lindsay, 3rd of Edzell & 9th Earl of Crawford, who succeeded his cousin Alexander, Master of Crawford, in the honours of Crawford on his being found guilty of patricide although, with Royal consent, he re-conveyed the Earldom to this Alexander whom he brought up and educated. He also succeeded his grandfather, Sir David Lindsay, in the lands of Edzell and Glenesk on his death in 1527 and had a charter under the Great Seal for the lands and barony of Glenesk and numerous others, on 16 October 1541, with remainder to himself and his heirs male, which failing, to his brothers Alexander, John and Robert, and their heirs male respectively, which failing, by his uncle Alexander Lindsay.[16] He m. firstly by 12 June 1535, to Janet, daughter of Andrew, 3rd Lord Gray,[17] (she was widow of Alexander Blair of Balthayock, and of Thomas Fraser, 2nd Lord Lovat), and secondly in 1549, to Katherine, daughter of Sir John Campbell, 1st of Cawdor, (she was widow of James, Master of Ogilvy, who had been k. at the battle of Pinkie in September of 1547 and by whom she had issue), and d. on 10 September 1558. He was father of :

Sir David Lindsay, 4th of Edzell, who, with Katherine Campbell, his mother, had a charter under the Great Seal for the Lordship and Barony of Glenesk on 1 April 1554, in which he is styled eldest son of David, Earl of Crawford.[30] He was constituted a Lord of Session on 23 February 1597 and d. on 15 December 1610, having m. firstly, Helen, daughter of David Lindsay, Earl of Crawford, (c/m in March of 1570), and secondly, to Isobel, daughter of Arthur Forbes of Rires, (c/m 1 December 1585). He was father of :

He was also father of a natural son ;

Mr. Alexander Lindsay of Canterland, is styled son to Sir David Lindsay of Edzell when witness to a charter dated 4 August 1604[38] and obtained the lands of Canterland. He m. firstly at Dunfermline on 1 January 1610, to Jean, daughter of James Murray of Pardewis,[39] (c/m at the Canongate, Edinburgh, on 14, 16 & 19 December 1609[40]), with whom, on his own resignation, they had a conjunct charter under the Great Seal for the lands of Canterland to themselves and their heirs male. He m. secondly to Helen, daughter of John Haldane of Gleneagles, (c/m 6 May 1613[41]), d. in 1631 and was father of :

John Lindsay, 6th of Edzell, succeeded his father and was served heir to his uncle, Sir David Lindsay, in the lands and barony of Glenesk and Edzell on 2 June 1648,[43] then, on the death of George Lindsay, 3rd Lord Spynie, in 1672, he became Chief of the Lindsays and put forward a claim for the honours of Crawford although this was disallowed. He m. Jean, second daughter of John Carnegie, 1st Earl of Northesk, (c/m 9 August 1647.[44] She was widow of Alexander Lindsay, Master of Spynie, by whom she had no issue), and d. in April of 1671[45] having had issue : 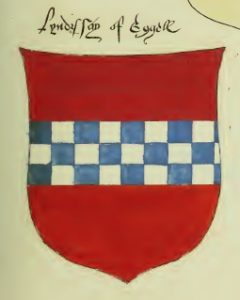 Arms of Lindsay of Edzell as
illustrated in Sir David Lindsay's
MSS of circa 1542.