This account is still in the research stage and a draft version is only included here to clarify and amend existing accounts, especially in relation to the early ancestry of the family as well as the succession from Sir Adam Mure of Caldwell (died 1507/08), to his grandson and heir, John Mure of Caldwell (died circa 1538). That John Mure of Caldwell descended of the body of Sir Adam and was not a brother's son and heir male to him, as has generally been presumed, is proved by the statement in favour of John's grandson and heir, Sir Robert Mure, in 1577, which refers to Sir Adam as having been his great-great-grandfather. This corrects various previous errors in interpreting the term "nevo" in the Privy Seal gift of 1508, to have meant "nephew" instead of "grandson".

The resolving of the identity of that John's two wives should also be noted. They were (1) Isobel Montgomery and (2) Janet Stewart, relict of Sir John Kennedy of Culzean. Janet Stewart has generally been considered to have been a daughter of Matthew, Earl of Lennox, however, that is incorrect, and, instead, evidence proves her to have been one of several daughters of Sir Alexander Stewart of Garlies. Further, that she was not the mother of Sir John Mure of Caldwell and William Mure of Glanderston is proved by their both being of age by at least 2 September 1541, (a biological impossibility in view of her marriage to their father having only occurred some 11/12 years previously in 1529). This new evidence also rectifies the origins of the Glanderston stirpes. 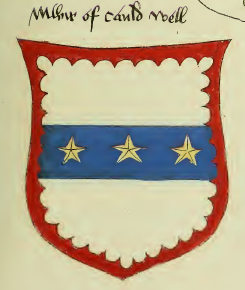