Sir John Wishart, was witness to a charter by Sir Robert de Montford granting a chalder of wheat to the Abbey of Arbroath some time before 8 March 1364 when it was confirmed under the Great Seal of David II.[1] He appears to have been father or grandfather of,

Sir John Wishart of Pitarrow, is the next for whm there is evidence. He was in possession of Pitarrow by 1437 when the lands of Gurdnes were allocated to him.[2] He had a payment from the exchequer in 1444[3] and was d. by 1446.[4] He was father of,

Sir John Wishart of Pitarrow, was, in all probability, the brother and heir of the last possessor of Pitarrow, Alexander Wishart. He had succeeded to those lands by 4 July 1452 and had m. by then to a woman named Janet with whom he made an endowment on that date to the altar of Saint Thomas the Martyr in the cathedral church of Brechin for the welfare of the souls of his parents and those of his ancestors and descendants.[6] He d. by January 1461 and was father of,

James Wishart of Pitarrow, succeeded and had a charter from Malcolm, Abbot of Arbroath, for the lands of Mill of Conveth on 17 January 1461.[7] He was witness to a charter by Alexander Burnett of Leys granting a pendicle of the lands of Leys to Alexander Gardyne and Janet Gardyne, his wife, on 28 May 1481[8] and d. about a month or so before his son and heir, John’s service as heir to him in the lands of Pitarrow on 29 July 1491. He was father of,

John Wishart of Pitarrow, succeeded his father, being served heir to him in the lands of Pitarrow, Carnbeg and Mill of Conveth on 29 July 1491[9] and had Sasine for Pitarrow in 1492.[10] He m. Janet Lindsay with whom he had a conjunct charter for the lands of Woodston, in the sheriffdom of Kincardine, on 13 June 1507,[11] and had a liferent reserved to he and that wife in their son and heir, James’s, charter of 30 April 1512. He was d. by 26 November 1513 and was father of,

Mr James Wishart of Pitarrow, was appointed personal clerk to the King, then clerk of justiciary and King’s Advocate by 26 November 1513.[16] He m. Elizabeth Learmonth, (who survived him and on 22 November 1524, in recognition of her husband’s “gud and thankfull service done to the kingis hienes and his derrest moder the quenis grace” she had a Gift of the marriage of their son and heir, John, for her benefit of that of “small faderless bairnis” to “put thaim to profit.”[17] She also had her liferent of the lands of Pitarrow reserved to her on 12 April 1525), with whom, on his father’s resignation, he had a conjunct charter for the lands of Carnbeg on 30 April 1512, which were then incorporated into the barony of Pitarrow.[18] He d. after 14 November 1524 when he was present in parliament and by the 22nd following having had issue,

4a} Sir John Wishart of Pitarrow, (see below).

3a} Robert Wishart of Carnbeg, had succeeded to Carnbeg by 6 Janaury 1619 when he and Robert Strachan of Edmanston entered into a contract relating to the cutting of peats.[26]

3a} Patrick Wishart, is styled son to Alexander Wishart of Carnbeg when witness to a charter by Patrick Barclay of Towie dated 24 April 1588.[27]

3a} Harry Wishart, is styled son to Alexander Wishart of Carnbeg when he raised an action against Robert Falconer of Ballandro on 26 May 1612.[28]

Sir John Wishart of Pitarrow, in favour of whom his uncle and namesake, Sir John Wishart, resigned the fee of his lands of Pitarrow and for confirmation of which a precept passed the Privy Seal on 31 October 1576, in which he is styled son to the deceased Mr. James Wishart of Balseyth.[30] He was served heir male to that uncle in the lands of Easter and Wester Balfour, and others, on 16 February 1585,[31] and resigned his lands and barony of Pitarrow into the King’s hands following which he had a novodamus in favour of himself and his wife, Jean Douglas, and with remainder to the heirs male of his own body, which failing, to his heirs male and assignees whatsoever bearing the surname of Wishart on 7 April 1603[32]. He m. to the said Jean Douglas, daughter of William, 9th Earl of Angus, (c/m 31 May 1576[33]), d. by 30 April 1607 and was father of,

4a} John Wishart, was included with his father in a protection from creditors under the Great Seal on 5 May 1638[43] and is styled the only son (filii unigeniti) when he consented to his mother’s disponing of her lands of Nether Mains of Benholm to Mr. Alexander Wood, portioner of Benholm, on 28 April 1638.[44] He m. Elizabeth, daughter of Sir George Home of Manderston, (c/m 14 August 1635), and was k. at the battle of Edgehill, on 23 October 1642.

4a} Jean Wishart, m. Alexander Wood of Benholm and had issue.[45]

[21] Not “Andrew Wishart of Carnebeg” as recorded in Vol. 5 of the Peerage.

[29] He is generally mistaken for the martyr of that same name who was executed in 1547. 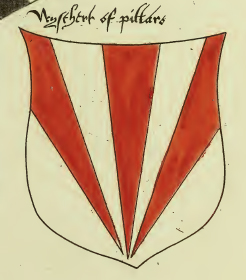 Arms of Wishart of Pittarow as
illustrated in Sir David Lindsay's
MSS of circa 1542.